The left and violent misogyny

Here’s just a few of the kind of threats issued day in and day out against gender-critical women – feminists, marxists, etc – overwhelmingly by MEN (albeit men identifying as women).

“Kill all Terfs”. “Shoot a Terf today”. “All terfs deserve to be shot in the head”. “Would you kindly suck on my womanly dick – preferably choke on it”. “Terfs can choke on my Girl Dick”. (These misogynists love the idea of women, especially lesbians, being forced to suck their dicks and preferably choke). “All terfs need to cease existing. All of them. Gone. Wipe them from the Earth. They are a plague to be purged”. “I’m not into mass murder but I’ll commit terf genocide if I have to, tbh”. “What if someone traced the ip of that emily person and went and killed her because i’d do that but I’m a bit far”. “That’s the only thing terfs deserve. being doxxed and killed”. “I wanna direct a snuff film where multiple TERFS get shot in the head but don’t die, they just suffer in agony”. “Murder Germaine Greer”. “Hope someone slits Germaine Greer’s saggy fucking throat”. “Rad fems and terfs make me extra stabby”. And on and on and on it goes relentlessly. 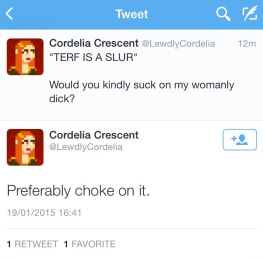 These are documented by the hundreds and hundreds at sites such as ‘Terf is a Slur’ and ‘Peak Trans’.

Not exactly the language of a liberation movement.

This violent misogyny, however, is all fine and dandy with a large section of the left. Especially males.

Who would have guessed that the left involves quite so many men who have a massive chip on their shoulder against women and women’s rights and advances in society and have finally found a way of letting out their previously suppressed inner violent misogynist, albeit vicariously through going along with this vile material?  Where they can look woke – pro-trans – instead of obviously looking like the vicious misogynists they clearly are?

Not hard to see where people like “Comrade Delta” and co. come from then.  (Comrade Delta was a central leader of the British SWP, their national secretary no less, who sexually assaulted and raped female members and who was protected by other leaders.)  The British SWP, not surprisingly, has massively drunk of the trans ideology kool-aid.

And look at the International Socialist Organisation in the United States.  ISO was the largest organisation on the US left for several decades, before imploding earlier this year.  ISO drank massively from the trans ideology kool-aid and was viciously hostile to gender-critical leftists.  And, yes, of course, it also turned out to have been harbouring violent misogynists.

Indeed, it was the discovery that members of its central leadership had been acting rather like the Catholic hierarchy – in this case harbouring and protecting men assaulting women, while the Church hierarchy protected priests who raped kids and nuns who bashed kids – that brought ISO down like a pack of cards in a puff of wind.  (American ISO is the group that NZ ISO linked to in the States and whose postmodernist identity politics they have recycled in relation to women’s rights.)

But it’s not just a man thing. There are also lots of “third-wave feminists” – you know, the ones who have benefited massively from the struggles waged by second-wave feminists and leftists but who have nothing but contempt for the very people who fought and partly won those huge battles.

It’s third-wave feminists who dismiss the women’s liberation activists of the late 1960s and early 1970s who actually got struggles for the right to abortion, equal pay and opportunities in the professions and workplaces in general, off the ground, along with progressive trade unionists and left-wing groups.  Third-wave feminists haven’t really done much fighting for women – their ‘feminism’ often seems to be more about molly-coddling super-entitled males who can’t grow up and cope as adults, especially men who claim to be women and want to gate-crash women’s sport, women’s changing rooms, women’s toilets, women’s prisons, women’s health resources, and even the definition of what a woman is.

When I was young you had to have empathy with oppressed people to be leftwing. You didn’t pretend to be them, just empathised and solidarised with them.  But, apparently not now, according to the new left. Indeed, it positively helps to be violently misogynist and also dismissive of the people who went before and won you so much.  And if they complain, pretend to be them and claim they are oppressing you.

In acting like ungrateful spoilt brats, a chunk of younger leftists mimic the capitalists who have contempt for the workers whose labour-power provides their profits.  British gender-critical transexual Miranda Yardley has, not surprisingly, called this layer of youthful faux radicals “the pampered offspring of neoliberalism”.

It should also be noted that accompanying this new trend to open violent misogyny there is the old sexism and chauvinism about the function of women.  In this narrative chunks of the left repeat the old conservative view that women are there to nurture and take care of the needs of men, not to fulfill their own needs.  This takes the form today of the argument that if men are hurting – in this case the men who say they are actual women – then the function of women is to tend their needs in the form of giving up their own spaces so men can occupy them.  So, let the men who claim to be hurting have women’s medals in sport, women’s toilet seats, women’s gyms, women’s showers, women’s health spending, women’s quotas, etc etc.

Not only is this the old conservative male entitlement and women as those who tend men’s every need ideology, it also let’s off the hook those men who assault and abuse males who present as women.  Instead of punishing women for the behaviour of some men, the actual progressive demand would be that male toilets and other male spaces be made safe for men who wish to present themselves in ways which are not traditionally male.  So a bloke in a dress should be able to go and pee at a urinal in a male toilet, for instance.  Instead of infringing on women’s rights by pretending he is “finding new ways of being a woman”, he should “find new ways of being a man” in men’s toilets, men’s changing rooms, men’s gyms.  It is not women’s problem, and it should not be women who are expected to just like it or lump it in the spaces they fought hard to have so they could participate more in society.

Moreover, just think about the notion that because some heterosexual men assault some trans-identified males the people who need to give up their spaces are. . . women.  This is the same mentality as the Zionist one that because Jews suffered centuries of persecution and pogrom, and then the holocaust, at the hands of white, Christian Europeans the people who should give up space for Jews are. . . the Palestinians.

Fortunately, there is a growing number of people who understand all this.  Among these are those elements of the younger generation who are not self-obsessed, social-climbing, self-centred bourgeois children and who do show empathy with the oppressed and exploited, as most women are.  This section of young people are part of the leadership of the fight to defend the rights women have won over the decades.  They have contempt for the men who identify as ‘left’ yet indulge and enable the relentless stream of violent misogyny coming from so many of the straight males who identify as ‘trans women’.  And they don’t believe women should have to give up a big chunk of their hard-won social space because some men want those spaces.  It is out of these elements of the younger generation that a new layer of genuine anti-capitalists, as opposed to tantrum-throwing children, will come.

For myself, I know I will never look in the same way at those left males, including a few former friends, who have turned out to be enablers of this relentless stream of violent misogyny.  Those of us who do not share their disgusting attitudes towards women should maybe – at the very least – find some new friends.  I know I have.

And we should join in the campaign to support women under attack from misogynist trans activists.  In particular,  we should stand up for the right of women to organise and speak publicly in defence of their rights and not be silenced by an ongoing campaign of threats of extremely brutal anti-women violence.

Defend the women who, in Britain, are getting police visits for daring to say in public, “Trans women are not women” and that the definition of woman is “Adult human female” while nothing is done about this endless stream of violent misogyny on Twitter and other social media and outside women’s rights meetings.

And as for the men who are ducking the issue – stop being cowards when women are under attack.  Grow a spine, step up and support the most fundamental rights of women, instead of chickening out.  If you guys don’t have the basic gumption to defend the most simple and basic rights of women don’t expect us to take your claims to be “revolutionary” seriously.  People who can’t even voice opposition to violent misogyny will never  get up the gumption to be on any barricades.

Now, also think how these same misogyny-indulgent leftists would react if this kind of violent hate was directed by white tweeters at Maori, Australian Aboriginals, black Americans. . .  It wouldn’t be tolerated for a second.  But it is perfectly OK for this utter poison to be directed at women.  How fucked up has much of the left in the imperialist world become?  (Doesn’t this stuff read rather like the racist diatribes of white supremacists, giving off a strong whiff of fascism?  And contempt for women and women’s rights is, after all, a core fascist attitude.) 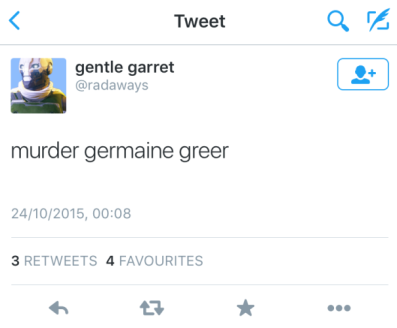 Back in 1845 Marx wrote, “Both for the production on a mass scale of this communist consciousness, and for the success of the cause itself, the alteration of men on a mass scale is necessary, an alteration which can only take place in a practical movement, a revolution; this revolution is necessary, therefore, not only because the ruling class cannot be overthrown in any other way, but also because the class overthrowing it can only in a revolution succeed in ridding itself of all the muck of ages and become fitted to found society anew.”

A whole bunch of leftist men seem determined to be part of “the muck of ages” rather than “fitted to found society anew”.  Never has the need for a new left been more apparent.