Lutte Ouvriere on the explosion in Chile

The following article is translated from Lutte Ouvrière, the weekly newspaper of the organisation usually known by the same name in France. 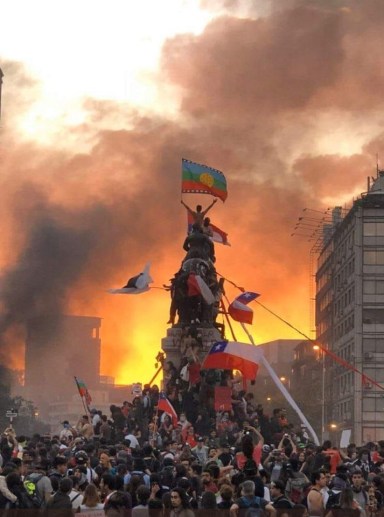 When, for the second time this year, Chilean President Piñera announced an increase in the price of Metro tickets from 800 to 830 pesos, students in the high schools and universities in Santiago, the capital, mobilized. On October 7, they invaded the train stations, jumping the turnstiles and blocking the trains.

Now, in this overcrowded capital, the Metro is used by three million people every day. The cost of transportation can represent 20% of the wages of a worker and almost 40% of the pension of many retirees. For this reason, the mobilization of the youth touched a popular current of anger.

When the government sent the police into the train stations against the students, the anger exploded. On October 18, about 40 stations were burned, which caused the closing of the entire system and general chaos in the capital. The same evening, President Piñera declared a state of emergency, applying a law that dates from the military dictatorship of Pinochet (1973–1990). General Javier Iturriaga del Campo deployed six thousand soldiers in the capital.

Piñera thought that the damage to the transit system would turn public opinion, and that sending in the army would demobilize the demonstrators. He got the opposite result. Soldiers in the streets recalled the nightmare of the dictatorship. Thousands of people descended on the streets of Santiago, banging on pots and pans, with cries of “Military, Get Out!”

Demonstrators brandished photos of people “disappeared” during the dictatorship and saluted the courage of the youth who had helped to erase their own fears.

The confrontations multiplied. Other train stations were burnt, buses were lit on fire, and private companies were invaded, like the building of the electric company Enel and a branch of the Bank of Chile. Supermarkets were looted, notably those owned by Walmart.

The fight spread to areas outside the capital, then to the whole country.

On Saturday, October 19, Piñera, forced to retreat, announced he was cancelling the increase in fares.

At the same time, General Iturriaga announced a curfew of 10 PM.

But at this new provocation, demonstrators went back into the streets: in Santiago, in Valparaiso, in Concepción, in Antofagasta, and in many other towns, where more public buildings were set on fire.

On October 20, Piñera declared on TV: “We are at war, against a powerful, implacable enemy who doesn’t respect anyone.” Seven demonstrators were dead and 1,500 had been arrested, but for the president, the demonstrators were the “real criminals.”

On October 21, the Student Confederation, the mineworkers union at La Escondida, the biggest mine in the country, and the dockworkers union in Valparaiso called for a general strike. The Central Union of Workers and other union federations joined in. While they had been quiet up to that point, they denounced the state of emergency and called for a strike on October 23.

Just a few weeks ago, President Piñera bragged that Chile was an oasis in the midst of the boiling situation in the rest of Latin America.

His intransigence caused an explosion around every issue that angered people. One leaflet, said: “This is not just about the Metro, but the dignity of all of society.” The leaflet denounced the many problems in this very unequal Chile: “healthcare, education, housing, the price of electricity and gas, the high salaries of parliamentary representatives, the diversion of money to the military, and the impunity of the bosses.”

The general privatization of the economy, which started under Pinochet, has grown to include the health, education, and retirement systems. The consequences have been borne by the population: going to college now results in decades of debt for most students, pensions pay at a poverty level, and a minimum wage so low that a member of Parliament makes 32 times as much. All this helped produce the explosion.