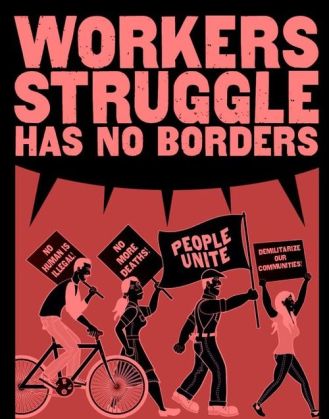 In 2016 the National-led government suspended the Parent Visa Category through which migrants were able to bring their parents into New Zealand.  Since then over 5,700 people have been in immigration limbo, stuck on the visa wait list.

Labour is now bringing back the scheme.  Well, sort of.  In other words, something worse than the earlier scheme – and to the right of National!

Ricardo Mendez March, a New Zealander originally from Mexico and who works with people in poverty in Auckland, receives the living wage.  He notes that with this new high-income threshold, “I will never be able to be reunited with my parents in Aotearoa.”

As he puts it, wealthy immigrants are able to get easy access to residency visas and be reunited with their parents while low-income migrants get shut down from the opportunity of being reunited with parents.

Wearing her best fake-concern face, prime minister Ardern claims it is “about making sure we strike the balance between, yes, allowing that category to come back, but also making sure that it is supporting those, in particular, who need it most.”

The other thing they like about migrant workers is that NZ’s bosses don’t have to pay anything towards the skills those workers have – they have been raised, educated, taught skills etc in the countries from which they come.  No part of the profits of NZ bosses have to be taken by the state here to do the educating, training, raising etc of these workers.

Of course, many migrant workers, precisely because they come from low-waged Third World countries, also have far more experience of militant class struggle than paheka NZ workers.  This country’s currently fairly tame unions should be in the forefront of welcoming Third World migrant workers.  Rather than dragging down NZ workers’ wages, they have the potential to increase the fighting capacity of the entire working class here.  That’s an important reason why workers in this country should welcome them rather than see them as a threat or as helpless victims.

Meanwhile, insult is added to injury as your place is subject to a lottery.  So, firstly you apply by meeting the rigid set of criteria, which also involve ‘character’ testing – I guess you can forget about getting accepted if you were involved in anti-government activity in the Third World country you came from – and, if you get through that, then you go into a draw.

That Labour is operating this dehumanising scheme should come as no surprise.  They have a history of vicious anti-Chinese racism, including in the period after WW1 where they denounced the Tories for not being racist enough against the Chinese.  In the 1930s, the first Labour government preferred “Aryan immigrants” to Jewish refugees from the Nazis.  In the 1970s, after the end of the long post-WW2 economic boom, Labour began the dawn raids on Pacific Island “overstayers”.  In the 1980s, they supported Muldoon stripping tens of thousands of Samoans of NZ citizenship.  Attacking migrant workers with new restrictions rushed through parliament by the Clark regime in 2008.  And in the run-up to the 2017 election, a key part of Labour’s propaganda was trying to stir up anti-Chinese racism – yet again.

Back in the very first volume of Capital (published 1867), Marx noted, “Labour cannot emancipate itself in the white skin where in the black it is branded”.  Translated to the 21st century, this means that supporting migrant workers from outside the First World is not a question of charity or self-sacrifice but a precondition of our own emancipation as workers in the First World.

Because the Labour Party stands for capitalism, it thus stands for the management of capitalist scarcity (eg in the provision of homes, health services, education services and so on).  Therefore they will always discriminate against poorer workers in terms of immigration – and these poorer workers are predominantly from the Third World and therefore not ‘white’.

So fighting for our class, a global class, always means fighting against Labour and against the capitalist system of exploitation, oppression and unnecessary scarcity to which Labour is totally committed.