Most New Zealanders do not support sex self-ID

The women’s rights campaign group Stand Up for Women has carried out an important piece of research around knowledge of self-sex identification proposed law changes. They issued a press release today with a summary of the findings of a survey of 1000 people.

Stand Up For Women Press Release 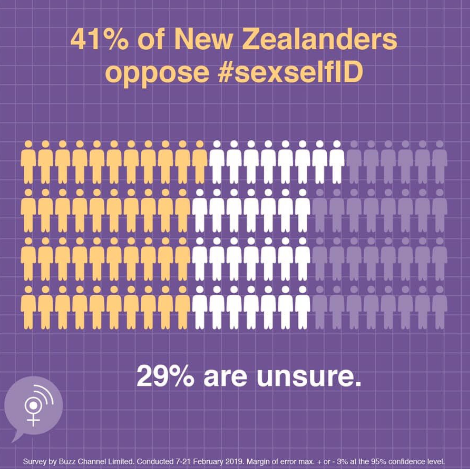 In New Zealand, case law has established that there is no requirement for a transgender person to have sex reassignment surgery before applying via the Family Court to legally change the sex on their birth certificate. Only ‘medical evidence’ is required, to demonstrate that meaningful steps have been taken to transition. Sex self-ID would remove the requirement for medical evidence, and would also remove the Family Court process, requiring just a one-step statutory declaration.

Ani O’Brien, spokesperson for Speak Up For Women, says: “New Zealanders understand that our sex is a biological reality – it is our chromosomes, sex organs, secondary sex characteristics; it is coded in our DNA, and while we should support diverse gender expression, we need to do so in a way that doesn’t impose the concept of ‘gender identity’ – which is essentially a belief system – on a society that, on the whole, does not subscribe to it.”

“Gender identity should be protected in a way that does not redefine the meaning of the word ‘sex’ in law, or diminish the human rights protections afforded to women and girls on the basis of their sex.”

Fifty percent of respondents said that medical advice should be required to change sex on birth certificates, and 27% said they were ‘unsure’, with just 23% in favour of removing this requirement. One of the most common reasons given by survey participants for retaining medical evidence was the need for ‘professional help in the decision-making process’.

Ms O’Brien says: “Speak Up For Women formed to be a voice for Kiwi women where there is currently a void of advocates representing the actual needs and beliefs of women. This survey shows that we are the only group currently speaking up for the majority of Kiwis on this issue”.