In stark contrast to the horror of the Christchurch terror attack there has been outspoken support for migrants at numerous gatherings around New Zealand to commemorate the victims.

Solidarity with migrants was the central message from the several thousand people who rallied in Auckland on March 24. The demonstration was organised by Love Aotearoa Hate Racism (LAHR) which formed in 2018 to oppose Islamaphobia and anti-migrant, anti-refugee politics. One weakness is that the Love Aotearoa slogan is itself  nationalist, and protesting the attacks should not fall back into kiwi nationalism, something which is part of the problem. The  placards and banners at the march mostly carried anti-racist messages, and the speakers gave vocal support for migrants. This rallying around migrants should make it harder for the government to make them scapegoats in the future. 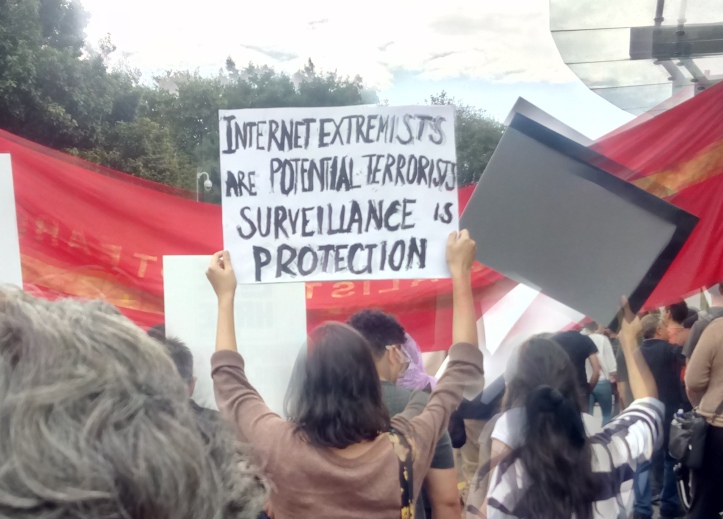 There were other messages on the march. One woman carried a hand made placard which said “Internet extremists are potential terrorists. Surveillance is protection”. Yet there has only been one arrest since the mosque massacres and there is no sign of other people being involved. It is doubtful that more surveillance – when there is already a powerful state spying network  – would have prevented the attack.  The placard is typical of the call for more state intervention from some on the left. They are calling for the state to censor and crack down on centre-right media personalities, and draft hate speech laws.

Similarly, there were vocal supporters on Twitter of  Whitcoulls’ bookstore for its decision to stop selling Jordan Peterson’s 12 Rules for Life. This action against a self-help book written by a Canadian academic, while leaving Mein Kampf on their shelves, points to a lack of critical thinking from those cheering this on.

Laws in New Zealand broadly protect freedom of expression and include protection from discrimination. There are currently no hate crime laws but the Bill of Rights, the Human Rights Act and Harmful Digital Communications Act, provide penalties against offensive material and speech.

Those who are calling for more state intervention, more surveillance, and the drafting of explicit hate speech laws are playing a dangerous game. What seems like a good idea now, with the terrorist in mind, can be used in other ways later. Furthermore, the terrorist did not utter a single word until moments before the massacre.

Words are not the same as violent deeds but they can be harmful. There is no argument that there is a mountain of offensive and hurtful material available on the internet. The largest quantity of such material is pornography, but the calls to limit free speech are not aimed at curtailing abusive and degrading treatment of women. The target is opposing political views, mostly alt-right and fascist ideas.

As odious as alt-right ideology is it is not on the rise in New Zealand; there is one tiny group, the National Front, who at their height gathered just 115 people from around the country to a demonstration seven years ago. There has been a tendency to make sweeping statements about white racism in the wake of the attack, but this blanket approach is not only a distortion of reality it doesn’t explain the killer’s extreme and individual actions.

The suppression of free speech is harmful as it can so often miss its target and be misused. There are leftists calling for  ‘Islamaphobia’, ‘homophobia’ and ‘transphobia’ to be considered hate speech. Would it include anti-semitism? Could that be used against opponents of Zionism? Writer  Dane Giraud who is pro-zionist calls Kia Ora Gaza a hate group. To his credit he opposes hate speech laws, but such laws could potentially open Kia Ora Gaza to legal charges of anti-semitism, by Zionists.

When rugby player Israel Folau said “gay people who don’t repent are going to hell” there were calls for hate speech laws to be introduced. Yet the debate which followed Folau’s comments showed that many people were willing to speak up against homophobia and Folau’s views were no longer mainstream. The campaigns for homosexual equality were carried out in public debates and resulted in changes to the law. While it is true that homophobic comments may be hurtful (or in this case laughable), tangible forms of discrimination can be opposed and are illegal.  For instance, it is illegal  to deny work opportunities or access to services on the grounds of sexual orientation.

To legislate for thoughts, beliefs and religious faith would make the government the arbiter of acceptable views. If it was not the government it could be major corporations such as Twitter or WordPress who determine what can and cannot be said. This is already happening with Twitter’s ban of feminist Meghan Murphy for ‘misgendering’ a pedophile male who on occasion presents as a transwoman.

Similarly, hate speech laws in the UK have led to absurd and cruel situations such as the case of Kate Scottow a 38 year old mother of two:

“I was arrested in my home by three officers, with my autistic ten-year-old daughter and breastfed 20-month-old son present,” Scottow wrote on popular online forum Mumsnet.

“I was then detained for seven hours in a cell with no sanitary products (which I said I needed) before being interviewed then later released under investigation… I was arrested for harassment and malicious communications because I called someone out and misgendered them on Twitter.” Scottow says that her laptop and mobile phone have been retained as evidence, preventing her from working on her Masters degree in forensic psychology. This is not an isolated case in the UK where women who are campaigning for protection of women-only services are being targeted by extreme transactivists and accused of transphobia. Here we see how hate speech powers can be misused.

Transgender ideologists have found it useful to label opponents ‘transphobes’ and deflect the criticism they face that their demand for access to women’s spaces is not a liberation movement. One woman on Twitter aptly noted: “I do not need a safe space from speech or ideas. I need a safe space to get undressed, to have a cervical smear, to compete in sports without getting hurt, to assemble freely with my own sex, to organise politically. It’s not my mind that’s vulnerable.”

The notion of hate speech is a modern form of blasphemy. In the past it was blasphemous to speak against the Church, today it is thought crimes that can be punished.

That does not mean that racism and bigotry should go unchallenged. It is only when we challenge ideas that progress is possible. It is likely that hate speech laws would make it harder for women from Muslim backgrounds to organise and speak out against repressive practices such as compulsory hijab in oppressive clerical Islamic regimes Some women raised this question around the call to wear a headscarf on the one week anniversary of the massacre. This gesture of solidarity and respect had an unintended consequence of being seen as undermining of the struggle of women in Iran to end the enforced hijab. Furthermore, the action was asking women to do something, but not men.

Contradictions and differences are not resolved by ignoring them or pushing them underground. State regulation in the realm of ideas is always a bad idea. Making the state the mediator and judge of public debate will stifle thinking. It is difficult and challenging but countering hate speech with free speech is far more positive than suppression.