On the Sydney siege 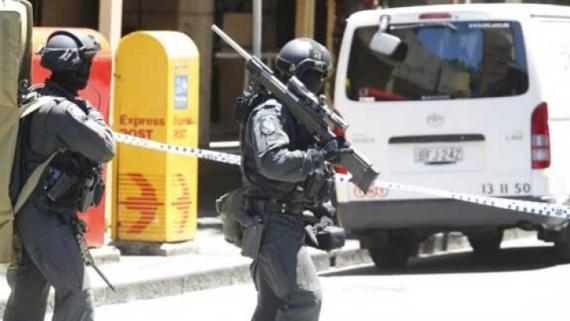 The piece below was written yesterday, before the death of the gunman, Man Haron Monis, and two of the hostages.  It is taken from the newspaper site of the Australian Marxist group Socialist Alternative.  Monis appears to have had an extensive history of criminal activity.  His lawyer told the Sydney Morning Herald today (Dec 16), “This is a one-off random individual.  It’s not a concerted terrorism event or act.  It’s a damaged goods individual who’s done something outrageous.”  The lawyer also noted, “Knowing he was on bail for very serious offences, knowing that while he was in custody some terrible things happened to him, I thought he may consider that he’s got nothing to lose.  Hence participating in something as desperate and outrageous as this.”

Much remains unclear regarding the hostage situation in Sydney’s Martin Place. The narrative that has been constructed through the media is that it is an act of Islamic terrorism.

If that is true, it should be seen in the light of the destruction of Muslim homelands by Western imperialism, and the increased surveillance, harassment and targeting of Muslims in Australia by ASIO, the police, the media and politicians of all hues.

It should be seen in the light of the passing of the latest and most draconian tranche of federal “counter-terror” legislation, which even the conservative Islamic Council of Victoria was moved to protest, due to the fact that it singles out Muslims.

It should be seen in the light of yet another Australian military deployment to Iraq. Australia on 14 September pledged support to the united front against the Islamic State, supposedly to protect civilians from the extremists’ barbarity. In reality, the coalition aims to shape the region in the interests of Western capitalism, with little regard to the wishes or well-being of local populations. The government offered 600 personnel including SAS forces, eight F/A-18F Super Hornet jets, training and logistical support. Scarcely a week later, IS spokesman Abu Muhammad al-Adnani called for retribution against the invading countries.

In a press conference earlier this afternoon, the prime minister said: “We have to appreciate that even in a society such as ours, there are people who would wish to do us harm … Australia is a peaceful, open, and generous society. Nothing should ever change.”

Abbott’s words are an odious manipulation. The PM’s Australia – the government and the repressive institutions of state that are directed to war – is anything but peaceful, open and generous.

The scent of Muslim, not simply the spectacle of the event itself, has the world standing at attention. The New York Times, the most prominent English language newspaper, is leading with the story. So is the Wall Street Journal. So are the Sun and the Mirror in Britain. The Times of India, one of the largest circulation papers, has a livestream.

World leaders are offering solemn messages of support. All Australian political parties are united against the terror and in sympathy with the hostages. If only Western compassion were shown to the hundreds of thousands killed in Iraq, the uncounted Afghan casualties, the Palestinians being cleansed from their land, the refugees interned and tortured on Manus Island, Nauru and Christmas Island.

We can only hope that no-one is killed in this siege. Those held against their will in the Lindt cafe are not responsible for whatever grievance is now being acted upon. If it doesn’t end peacefully, not only could it be a tragic loss of life, but all hell could be unleashed on Muslims, who are themselves under a siege of a different intensity across the country.

Even with a peaceful resolution, the situation will give further impetus to attacks on Muslims – both random attacks in the street and attacks from the state – further legitimisation of attacks on civil liberties and provide further distraction from the government’s domestic economic agenda.

Ibrahim Abu Mohamed, Australia’s grand mufti, along with other Muslim leaders, has been called on to comment, to distance himself, to condemn the action – something the Archbishop of Sydney and Christian leaders are never asked to do when Australia’s Christian prime ministers give the nod to the military to rain death on civilians in the Middle East.

The Liberals have made clear that they have no regard for the majority of Australians. They want pensioners living on dog food. They want to destroy public health so that working class people die in increasing numbers waiting for basic surgery. They want to stuff the environment for future generations. They want public housing eradicated so that increasing numbers rot in the streets. They want a world for the rich and a pliant class of workers with no choice but to work for pittance wages, no penalty rates and few rights, chewed up and spat out when they can no longer generate a profit for the bosses.

To get what they want, they need social division – an enemy within that seems more dangerous than their own program and which presents itself as imminent threat.

See also: The Sydney siege: the day after