Capitalism continues to baffle the capitalists

The following article by Michael Roberts is from his excellent blog (here); we’ve changed the title (his original was Draghi fights the drag).  Needless to say neither Redline nor Michael think the capitalist class is stupid – after all they are still ruling over us globally! – but they do have difficulty understanding why their system is so crisis-ridden.

After the European Central Bank (ECB) announced a battery of new credit easing measures at its council meeting yesterday, the European stock markets hit six-year highs, while Wall Street also reached another record. Indeed, the FTSE All-World equity index surpassed its previous high touched in late 2007 when the financial crisis began to unfold. Investors in the stock market (and in property) just love news that interest rates on borrowing are being lowered further and there will be all sorts of new cheap credit facilities to invest with.

Mario Draghi, the ECB chief, is worried that the Eurozone economy is not recovering and instead is in danger of slipping into a debt deflation spiral. So the latest measures: cutting interest rates; providing four-year cheap loans to banks if they lend onto to small businesses; and talking about buying bonds directly from banks (so-called quantitative easing, QE); all these are designed to boost the economy and lower the value of the euro against other currencies to help Eurozone exports, raise inflation and thus corporate profits.

The ECB downgraded its latest forecasts for growth in the Eurozone to just 1% this year and still expects real GDP growth to be below 2% even in 2016 (1.8% is the forecast). As for inflation, the ECB has a mandate to keep Eurozone inflation under 2% a year. It will have no problem with that. On the contrary, the inflation rate is falling not rising. The ECB now expects Eurozone inflation to be just 0.7% this year and be only 1.4% in 2016, and that assumes economic ‘recovery’ and the ECB’s credit easing works.
Can all this cheaper credit make a difference and stimulate the capitalist economy and not just stock, bond and property markets? Well, all the measures so far introduced by the Bank of England, the Bank of Japan and the ECB have failed to increase lending to industry. Net lending by the commercial banks to businesses (particularly small businesses) is negative.

The belief of mainstream economics (particularly the monetarist and Keynesian wings) that low interest rates and plentiful credit can get a capitalist economy going continues to be proved wrong. What matters for businesses is whether sales and profits are rising sufficiently to suggest that investment and borrowing is worth doing. Instead, large corporations around the major economies have been stockpiling cash in low tax havens and then borrowing (raising debt through bond issues) to buy back their shares to boost the price and pay out bigger dividends to shareholders. Small companies want loans to keep going but cannot get them because they are seen as bad credit risks by the banks, which are still trying to deleverage their previous bad debts. An ECB measure is hoping to get round that.

But it is demand for loans that matters not supply. More credit in an environment of low profitability in Europe , austerity and falling real incomes is really like pushing on string. Or to use another cliché, you can take a horse to water but you cannot make it drink. Many corporations are unwilling to invest while profitability remains lower than before the Great Recession. That is the case in all the major economies, even the US, where the nominal mass of profits (and measured against GDP) has been at record levels. And as I reported in a previous post, US profits have started to turn down (see http://thenextrecession.wordpress.com/2014/06/02/is-americas-profit-explosion-over/).

At the same time, real wages are falling in most parts of Europe, the UK and in Japan, while stagnating in the US. This is no environment for capital accumulation.

The latest figures for the so-called Flow of Funds in the US economy reveal that, while total debt to GDP has been falling from a peak in 2009, this has been due only to banks going bust and ‘deleveraging’ and households defaulting on their mortgages and walking away. Corporate debt has risen as companies issue more bonds to buy back their own shares and raise dividends for shareholders. The economic recovery remains very much a ‘fictitious’ one. 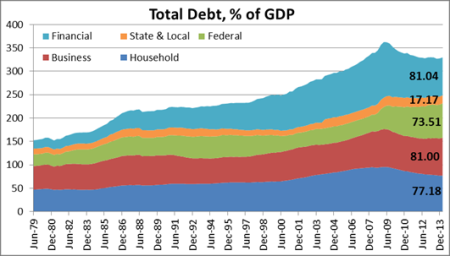 I have argued in the past that getting corporate debt down is a necessary part of the process of devaluing capital and restoring profitability for sustained accumulation (see http://thenextrecession.wordpress.com/2013/02/25/deleveraging-and-profitability-again/). As Bank of America economists recently concluded: “In our view, further required balance sheet adjustment in the (non-bank) private sector weighs on the outlook for investment.” The level of debt had reached unprecedented levels before the Great Recession. But near-zero central bank interest rates and guaranteed credit has encouraged large companies to borrow even more. That poses a risk ahead: if interest rates were to start to rise, many companies would be pushed into bankruptcy.

The flow of fund data also show that the US corporations are maintaining large surpluses rather than investing in technology (red block). So the US economy is unable to expand (falling black line) at the rate it did between 2002 and 2008. Instead, corporate spending in the real economy has stagnated and so the US economy has failed to expand much (tightening black line) since 2009. 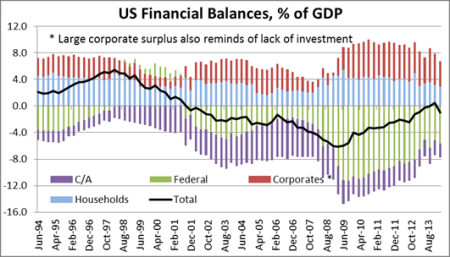 Economic growth in the major economies remains stuck at well below trend despite the efforts of central banks. The US is doing little better than 2% a year and that’s the same as Japan (and probably the UK), while, as the ECB says, the Eurozone area will only manage about 1% a year.

Will the ECB measures change that? Well, it has not worked elsewhere, except to help the rich investors in stock markets (US household wealth has jumped up 10% this last year as a result of higher financial asset and property prices). Indeed, if the ECB succeeds in raising inflation rates and lowering the euro, that is only more bad news for the average European household. The measures of the BoJ in Japan have raised inflation but not reduced unemployment or raised wages. So Japan’s ‘misery index’ (unemployment plus inflation rate) is at a 30-year high! 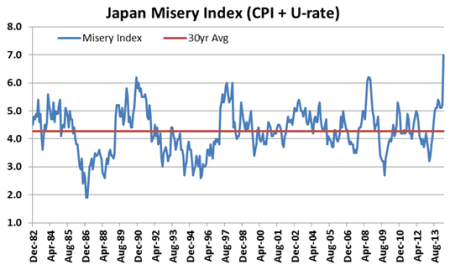 Governments in Europe are starting to talk about new measures of fiscal stimulus as well as monetary stimulus from the ECB. But as in Japan, the one announced by the Spanish government this week is mainly to cut the taxes on corporate profits, not to boost real incomes or get unemployment down. If you start from the premise that there is only the capitalist economy to work with, and more business investment won’t happen without higher profitability, then cutting taxes for business makes sense. But it has not worked so far to get things going.

Ironically, the ECB measures did not lower the euro’s value against the dollar and the pound as hoped. That’s because the US and other governments tried to talk down their currencies too and investors were not convinced that the ECB had done enough. So the most important part of ECB’s plan, a lower euro, has not happened so far. Every government wants a weaker currency to stimulate exports with world trade growth slowing (see my post (http://thenextrecession.wordpress.com/2014/05/12/world-economy-still-crawling/) – it’s a race to the bottom for currencies.