From the blog of Irish socialist-republican party éirígí: 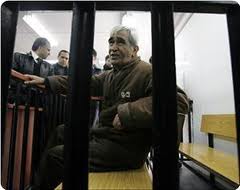 Addameer, the Palestinian Prisoner Support and Human Rights Association, revealed last Thursday [October 27] that an Israeli court has decided to extend the isolation of PFLP general secretary Ahmad Sa’adat for another year.

The ruling is in direct violation of an agreement between Israeli prison authorities and Palestinian prisoners a week earlier that ended a mass hunger strike by detainees held in zionist jails.

The Israelis had promised that detainees would be released from isolation immediately after 477 prisoners were freed in exchange for captured Israeli soldier Gilad Shalit on October 18. A further 550 detainees are to be released in the near future.

Around 20 prisoners continue to be held in isolation, and several prisoners have been in isolation for a number of years, including Sa’adat.

Sa’adat was transferred to Ramle prison hospital when his health deteriorated after three weeks on hunger strike. He was brought to the court in Bir Saba on Thursday for the ruling.

éirígí representative John McCusker said, “We’re disappointed but not at all surprised by this recent development. It’s no shock to hear that the zionists have increased the punishment of Palestinian prisoners after the deal was struck to release 1,000 detainees.

“We welcome the release of the prisoners but we can’t take our eyes off the fact that over 6,000 Palestinians continue to be held captive by the Israelis, and they are susceptible to punishment and torture.

“We in éirígí reiterate our call for the freedom of all Palestinian prisoners held by the zionists, and we say again that ultimately only a free Palestine offers a just solution to the prison issue.”